Monitor for needlecast and blight diseases on older foliage where new foliage is emerging on pine and spruce.

Diplodia tip blight (Sphaeropsis sapinea) on 2 and 3 needled pines can be a significant disease of pine, especially on stressed Austrian pines in the urban landscape. Diplodia tip blight appears as brown, stunted needles at the tips of branches and black fruiting structures are often visible on past year’s dead needles (and cones) after rainy days.

Rhizosphaera needleast most often appears on lower branches, and on older needles (2 years old and older)

To confirm it is needlecast disease, look at the STOMATES with your hand lens. Those little white dots (stomata, lower healthy needle) will turn black (upper needle) and the black fungal fruiting structures will protrude in place of the stomates.

Colorado spruce are our one of our most common hosts for needlecast diseases in Ontario. Rhizosphaera needlecast (Rhizosphaera kalkhoffii) appears as brown-purplish needles with black, smooth fruiting structures (pycnidia) pushing through the stomates. (Healthy needles have white stomates.) Older needles (2013, 2012) on lowermost branches that receive afternoon shade will be showing the most signs and symptoms of Rhizosphaera.  These infected older needles will drop in spring, leaving trees looking barren.

Stigmina needle blight (Stigmina lautii) can also be found on spruce (Colorado, Norway and white) and appears as black, spiked-looking fruiting structures (sporodochia) pushing through stomates on green and reddish-brown needles.  Quite often, the infected, symptomatic needles won’t drop until the following year.  Pathologists have observed trees with both Stigmina and Rhizosphaera infections (on the same tree).  If needles are green but stomates look black, chances are its Stigmina and not Rhizosphaera.

New, soft growth is especially susceptible to foliar diseases, but infection may also take place later in the season. Where there is a history of damage, treat with registered fungicides (copper oxychloride, Banner Maxx, Daconil) as buds start to open and protect new foliage. Where necessary, apply fungicides prior to precipitation events (spore dispersal).  It’s been fairly dry this week but wet weather is in the forecast.

Unfortunately, most of these blights and needlecasts can be found sporulating for much of the year so management can be difficult.  Methods that improve air pore space in the root zone (e.g. soil aeration and methods such as vertical and radial mulching) can help relieve compaction issues and provide conditions more favorable to root growth of evergreen trees in the landscape. 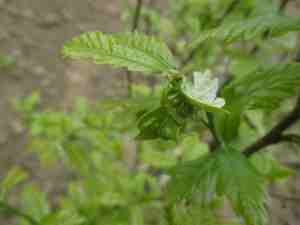 Now is the time that we notice all of those wacky leaf galls on deciduous trees.  The vast majority do NOT harm the health of the tree and are usually not significant infestation because natural predators and parasites keep the wasps and mites that case these leaf galls in check.  Tell your clients they are a natural relationship between two organisms and a sign of biodiversity.