Helping the Bobolink and Meadowlark 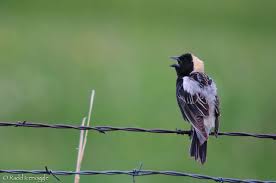 Some of you have been asking how you can delay your hay cutting to help ensure successful breeding of grass land birds.  Open pastures and hay fields provide important habitat for two grassland bird species: bobolinks (left) and eastern meadowlarks (right) that can be recognized for the male song. Both of these birds are on the province’s endangered species list as Threatened Species and their decline can be linked to habitat loss and habitat disturbance both here and in their winter grounds.  Early hay harvesting destroys eggs and nestlings of these endangered species.

Ontario has a Recovery Strategy for the two species and there is an exemption for agriculture until December 31, 2015 to help provide time for the ministry to further engage the public and stakeholders in developing a protection and recovery approach for these two bird species.

Female Bobolink feeding her chicks, the nest is made of grass in a shallow depression in the ground.

Bobolink egg-laying usually begins around the last week of May in Ontario.  On average, the female lays 5 eggs and incubates them for 12 days. The young hatch starting around mid-June stay in the nest for another 12 days.  Most nestlings have left the next by mid-July.  They are poor fliers for the first week or two and usually remain with parents at that time.

The female Eastern meadowlark feeding her chicks. The nest is made of grasses grasses woven into surrounding vegetation, often forming a protective bowl.

Eastern meadowlark egg-laying usually begins around the mid-May in Ontario.  On average, the female lays 4 eggs and incubates them for 14 days. The young hatch starting around mid-June stay in the next for another 12 days.  Most nestlings have left the nest by mid July.

There are several factors (such as degradation of South American wintering grounds) that are linked to the decline of these two bird species. However, watching for the presence of these birds in your fields and adjusting harvesting practices (where possible) to allow for more successful reproduction of these threatened species can go a long way in helping to build their populations back to more plentiful levels.

OMAFRA Nursery and Landscape Specialist @onnurserycrops
View all posts by Jen Llewellyn →
This entry was posted in Environment and tagged bobolink, eastern meadowlark. Bookmark the permalink.