Look for small, white, woolly tufts or masses on the twigs of hemlock (Tsuga canadensis) (Photos: Julie Holmes, CFIA). It is still a good time to scout for Hemlock Woolly Adelgid (Adelges tsugae) because of the visibility of the white covering on the egg masses.  It is not an established pest of Ontario but we need to keep on the lookout!It has been found at one site in Etobicoke 7 years ago by an awesome arborists (no additional finds) and in the Niagara gorge area.  Unfortunately it is a common pest in the neighbouring US so it is very important for us to continue monitoring for this pest.  Injectable applications of Ima-jet are registered to protect hemlocks from this adelgid pest.

These small, white, woolly masses contain the tiny eggs that give rise to the next generation of hemlock woolly adelgid (Photo magnified: Julie Holmes, CFIA).  This pest is regulated by the Canadian Food Inspection Agency and should be reported to CFIA if it is detected here.  Infested trees are removed and destroyed in an effort to protect our beautiful hemlock trees.

They overwinter as egg masses on bark, twigs and at the base of buds (resembling hemlock woolly adelgid eggs above).

Right now, pine bark adelgid egg masses (see above, Photo: Melissa Huntley) are present on white pines (Pinus strobus), and Pinus contorta. Egg masses are covered in white, woolly wax and are found near buds. Once eggs hatch, an application of insecticide (Malathion, Orthene, Tristar) may be warranted where populations are high. Check out the factsheet from Michigan State University for some excellent photos: (http://msue.anr.msu.edu/news/pine_bark_adelgid_becoming_active_in_white_pines).

Monitor for newly hatched stem mothers of  Balsam twig aphid on terminal buds on fir, white spruce, Colorado spruce and juniper, they are susceptible to dormant oil applications and insecticides.

Eggs are hatching and developing into stem mothers (nymphs). The tiny, bluish grey aphid stem mothers can be found on terminal buds as they break.

Tap twigs over a black surface to easily see teeny-tiny BTA stem mothers.  Apply Closer, Endeavor, Malathion and Tristar on warm days (55 to 78 GDD Base 10oC OR before bud caps loosen off) to target these stem mothers and prevent the damaging generation that follows.

Overwintering white pine weevil adults are active and are laying eggs on last year’s leader of pine and spruce, starting when the Forsythia is blooming. Monitor for small black/brown snout beetles around the foliage and in the duff layer below the canopy. An application of insecticide on last year’s leader may help reduce successful egg-laying and damage to this year’s leader.

Cooley spruce gall adelgid and Eastern spruce gall adelgid overwintering females have already started laying their eggs and are no longer susceptible to insecticides. Use a pin to push away the woolly masses covering the female bodies to see the tiny brown eggs.  If no eggs are found, just dark adelgid nymph bodies…….they are still susceptible to insecticides.

Monitor for eggs of spruce spider mite on conifers with a history of mite damage (Abies, Picea, Thuja). Spruce spider mite eggs appear as very tiny, round, reddish-brown spheres that adhere to the UNDERSIDES of twigs and foliage this time of year. YOU WILL REQUIRE A HAND LANDS TO SEE THEM CLEARLY. Monitor lower branches, on the North and Eastern side of the tree, this is where most of the feeding damage is done. These eggs are susceptible to dormant hort oil applications in the next few weeks, where temperatures permit and plant species are not sensitive.  Miticides will be effective once eggs hatch to nymphs, usually around bud break and early foliar emergence (Floramite, Kanemite, Vendex). 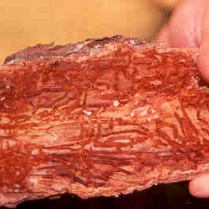 Pine shoot beetle adults have emerged. The tiny beetles take flight after 2-3 days where temperatures reach 10-12oC (Photos: Ed Czerwinski) . Adults lay eggs underneath the bark of stressed or dead pine trees and stumps. Those larvae will develop later in April and May. Remove brood material (i.e. trap (sentinel) logs, snags, dead/dying trees) before new progeny adults emerge (210 GDD, Base 10C) to comply with the CFIA. All brood material must be burned, chipped (less than 2cm diameter) or buried (30 cm deep) to comply with CFIA standards.

Look for yellow-brown nymphs of Fletcher scale (Lecanium fletcheri).  The newly hatched crawlers in late June-July are more susceptible to pesticides but these overwintering scale nymphs may still be susceptible to registered contact and systemic pesticides.  Where heavy populations are detected, spraying asap may help reduce damage and honeydew.  These scale insects produce a lot of honeydew in June.  Monitor Taxus (yew) and Thuja (eastern white cedar). 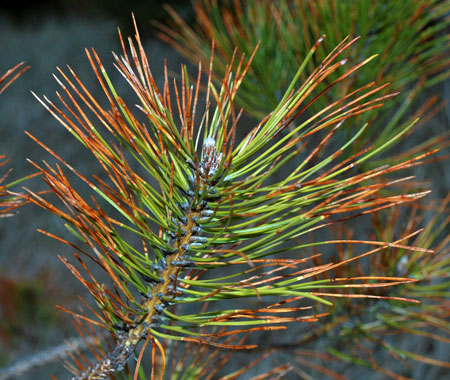 Brown shoots on juniper may be a symptom of juniper tip blight (Kabatina blight). A small grey band or pinched grey canker can be found at the base of the infected shoot, this is where the spores come from. Where plants are still dormant, PRUNE OUT DEAD SHOOTS during DRY conditions (and remove shoots) to reduce disease spread. Disinfect pruning shears between each cut (e.g. rubbing alcohol, other sterilants) to reduce disease spread. Pruning is not suggested once new growth appears, as it will help spread this disease. Where cankers are found, copper and Dithane are registered to protect emerging new growth this spring and again in late summer.  [Juniper tip blight caused by Phomopsis sporulates in early spring whereas that cause by Kabatina sporulates in late summer. ]