They’re BACK! Gypsy moth are hatching! 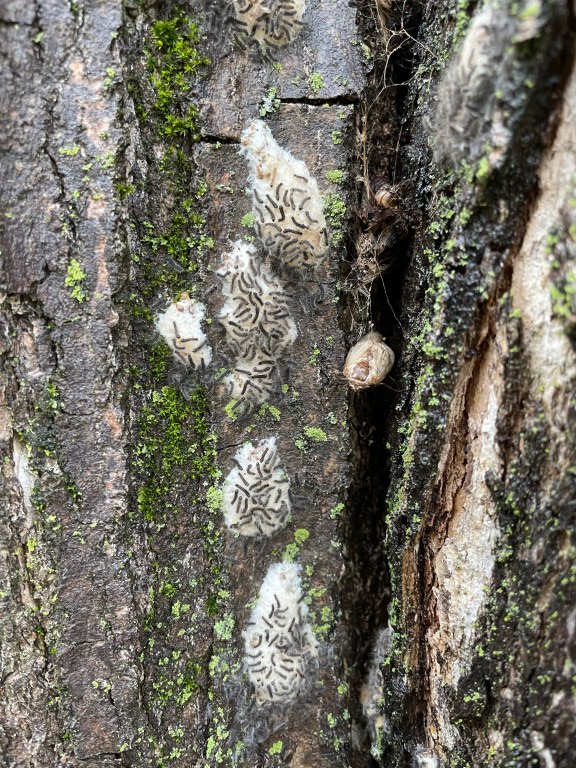 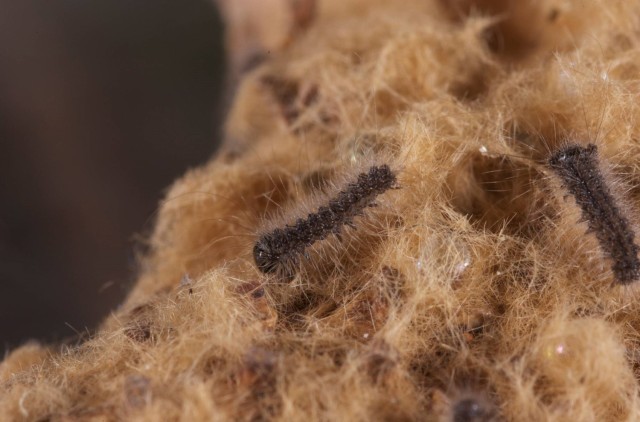 First instar Gypsy moth (Lymantria dispar) larvae have hatched and are dispersing, especially in the Southwestern part of the province!  Larvae lucky enough to hatch on a desirable host will begin feeding on emerging foliage…the rest will climb to the top of the tree to disperse on tiny silken threads in hopes of landing on other delicious botanical hosts.  Some of the few hosts they won’t feed on include red maple (Acer rubrum) and they don’t usually feed on conifers such as hemlock and cedar…but this year they might be desperate enough to take a BITE.

For more information on the Biology and Management of Gypsy Moth, please see my previous post:

2021 Will Be Remembered as “The Year of the Gypsy Moth”

Over the next few weeks, look for holes in leaves and turn over inspect  leaf undersides for tiny, dark, fuzzy larvae.  We often see both Gypsy moth larvae and cankerworm larvae feeding on the same leaves.  Their favorite hosts seem to be species of Quercus, Acer, Fagus, Tilia, Betula and they can even be found on Picea pungens! Gypsy moth larvae may also hide in bark crevices during the day (Photo: Gypsy moth larva on Fagus sylvatica leaf, J. Llewellyn). 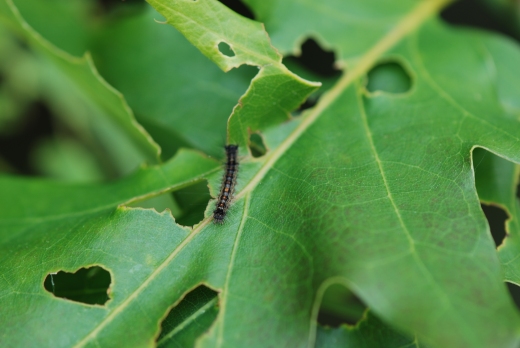 Larvae will be hatching over the next 2 weeks, they do not all hatch at once.  This makes spraying tricky.  It will likely require at least 2 applications of insecticide this year because of the early season heat and the record-breaking population levels.

Winter and early spring scouting for Gypsy moth egg masses has indicated EPIC levels of the moth larvae can be expected in much of southern Ontario this year!

Gypsy moth Cultural Management: Some keen horticulturalists can install a burlap skirt at the base of the tree to create a shady, protected area for larvae to hide during the day (this behaviour usually peaks near the end of May and early June). Homeowners will need to inspect burlap skirts and underlying bark crevices daily (1-3 pm is best) and remove/destroy larvae. Sticky bands around trunks during the June/July flight period will help trap flightless females and keep them from laying eggs on the bark.  The sticky band trapped females will also attract males to the sticky surface J

For great images and management information check out our FREE scouting App Bugfinder, on Apple and Google Play!

Some other caterpillars of interest this year…

Eastern tent caterpillars have hatched and have been feeding for a week or two in the southwest on Malus and Prunus spp..  Manually remove tents and clusters of larvae.  Where cultural management isn’t possible, spray Bacillus thuringiensis (B.t., Dipel, ReVokBTK).

In the coming weeks, look for holes in leaves on deciduous trees.  This sugar maple was showing interveinal holes in late May a few years ago, and closer inspection revealed fall cankerworm (Alsophila pometaria) larvae on the leaf undersides.  Larvae are pale green (although you’ll often see darker races too) and blend in with newly emerged foliage.  They are only about 5-8 mm long right now but oye, can they eat!

Where populations were high a few years ago (Hamilton, Ancaster, Niagara), monitor for larvae on several hosts such as Acer, Tilia, Quercus, Ulmus etc.  A foliar application of the bio-insecticide Dipel/Foray or Xentari (Bacillus thuringiensis, B.t.). can help to significantly reduce populations and subsequent injury. Click here for a video.

In the coming weeks, you may find fall cankerworm larvae suspended by threads that dangle from leaves… or crawling on your shirt during a nice spring walk.

There were pockets of heavy forest tent caterpillar populations in 2018, especially in eastern Ontario.  There may only be mild-moderate populations this year so inspect your sugar maples for this pest.  This insect is a periodic pest of maple syrup sugar bushes and of deciduous forest stands, as well as urban trees.  Manage larvae with foliar applications of  the bioinsecticide Bacillus thuringienesis (B.t., Dipel, Foray).